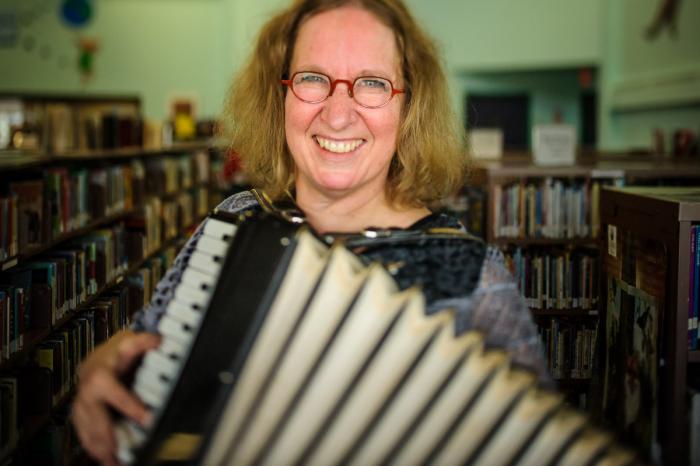 Singing is a communal activity in many cultures. - Anne Lederman

The James McConnell Memorial Library in Sydney, Nova Scotia, was the setting for a symposium that brought together musicians, writers, and academics to celebrate the art of storytelling.

Singing Storytelling is a symposium hosted by Cape Breton University in parnership with Celtic Colours International Festival and CBC Cape Breton. On October 9th, visitors gathered at the library to attend workshops, talks, and demonstrations about the lives, music, and verbal artistry of bards in our world.

Anne Lederman, a fiddler, singer, and composer led a workshop on Canadian Songs of Immigration and Survival. She is strongly rooted in several music traditions including Métis, French, Scots-Irish, Eastern European, and African.

In the main room of the library, a diverse group of attendees gathered around her as she began her peformance. Lederman sings in both English and French. The group raise their voices and sing along with her.

"This is a song about Canada as the answer to everyone's dreams and hopes."

Lederman moves easily between songs, touching on traditional songs from Gaelic, French, and African Canadian communities. To close out her sessions she has the crowd on their feet stomping and singing a song that originated in the Caribbean community in Toronto.

The Singing Storytellers Symposium continues until October 12th. A full schedule can be found on their website.