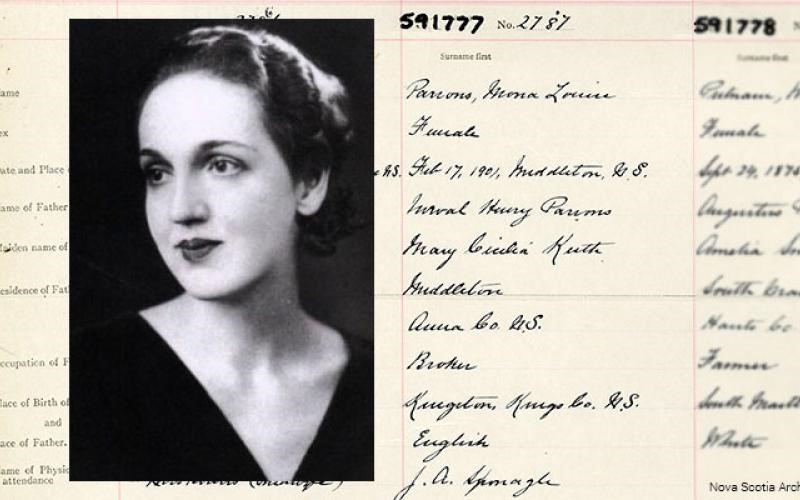 Born in Middleton, Nova Scotia in 1901, Mona Parsons was a member of the Dutch Resistance in the Netherlands and the only Canadian woman to be imprisoned by the Germans during the Second World War. Her capture and remarkable escape from prison is a remarkable story.

**Find copies of Mona Parsons: from privilege to prison, from Nova Scotia to Nazi Europe in libraries across Nova Scotia. It is also available online as an E-Book, login in with your public library card:

The story of Mona Parsons is one of many... Find more stories of Notable Nova Scotian Women and celebrate at your local public library: http://publiclibraries.ns.ca

**Please note that public libraries are closed on the Heritage Day Holiday.

Black women who made a difference in Nova Scotia / edited by Dolly Williams. Congress of Black Women of Canada, c2007.

I'm not what I seem: the many stories of Rita MacNeil's life / Charlie Rhindress. Formac Publishing Company Limited, [2016]

Maud Lewis: the heart on the door / by Lance Woolaver. Spencer Books, 2016.

The Nova Scotia nine: remarkable women, then and now / portraits by Jo Napier; stories by Joanne Wise. Halifax, N.S.: published for the Advisory Council on the Status of Women by Communications Nova Scotia, 2014.

Rebel women of the east coast: daring to go beyond the limit / by Michelle Porter. Altitude Publishing, c2005.

Song of Rita Joe: autobiography of a Mi'kmaq poet / Rita Joe; with the assistance of Lynn Henry. Ragweed Press, c1996.

Throwing rocks at houses: my life in and out of curling / Colleen Jones with Perry Lefko. Penguin Canada, 2015.

Women of courage: 15 Cape Breton lives, in their own words / collected with an introduction by Ronald Caplan [editor]. Breton Books c2016.

Year of the horse: a journey of healing and adventure / Marjorie Simmins. Pottersfield Press, 2016.

Christmas with the rural mail: a poem / by Lance Woolaver; with paintings and hand-painted Christmas cards by Maud Lewis. Nimbus Pub., c2010.

Singing towards the future: the story of Portia White / by Lian Goodall; illustrations by Liz Milkau. Napoleon, c2004.

Sister Margaret Beaton, 1893 — 1975
Librarian and archivist, collected material pertaining to the history of Cape Breton and Gaelic materials that would otherwise have been lost, Beaton Institute of Cape Breton Studies named in her honour.

Ellie Black
Artistic gymnast and medalist, represented Canada at the 2012 and 2016 Summer Olympics.

Constance Glube, 1931 — 2016
Chief justice of the Supreme Court of Nova Scotia, first woman to become chief justice of a Canadian court, officer of the Order of Canada.

Rita Joe, 1932 — 2007
Poet, earned many accolades, Unofficially known as the "poet laureate" of the Mi'kmaq people.

Aileen Meagher, 1910 — 1987
Track and field athlete, in both the Nova Scotia Sport Hall of Fame and the Canadian Olympic Hall of Fame.